For those looking to jump into the future of motorcycle engineering, look no further than the Lazareth LM 847. We can guarantee that this bike is like nothing you have ever seen, and its rarity only escalates when you realize there are only ten in the world – and only five available for purchase!

Ludovic Lazareth has been a trailblazing pioneer of the motorcycle world for over two decades now, famed for pushing the boundaries of what is possible in the modern-day bike. At first, Lazareth concentrated his energy on modifying existing cars and bikes to achieve new heights but quickly moved into prototyping and manufacturing his unique creations. In 1998, he decided to create his company, Lazareth Auto, to give his imagination complete freedom.

Lazareth Auto, a French-based manufacturer, is perhaps most famed for producing the LMV 496, a flying bike powered by jet engines and an electric motor to both drive on the road and glide through the air. Considered one of the disciples of Mr. Franco Sbarro, it comes as no surprise that the LM 847 is once again bringing the future of motorcycles into the present day.

The LM 847 uses a V8 Maserati engine to produce an impressive 470 horsepower – so much power that it needs four wheels to contain it all. The independent suspension, designed using specialized kinematics, allows the user to tilt while driving, giving them full control of the beast beneath them. A torque converter is used to transmit the power from the V8, driving the LM 847 to incredible speeds. In fact, this bike boasts 0-150 kph in just a few seconds! The Lazareth only has a one-speed setting which is why it is designed to look like a bullet. 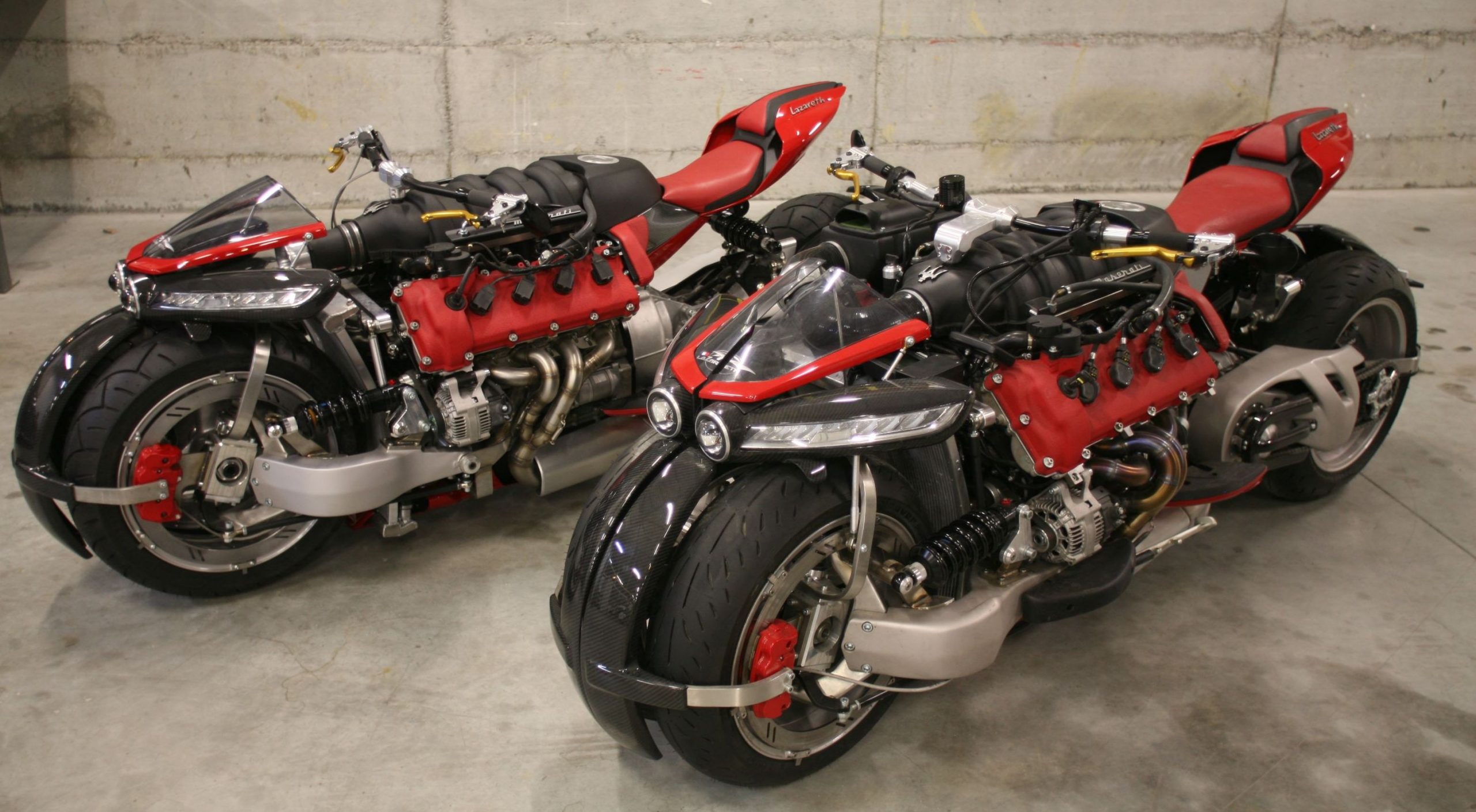 The LM 847 is designed to retain consistent tension within its two chains, thanks to two swing arms at the back of the bike. The four wheels, each with a diameter of 17 inches, keep the bike stable during acceleration and high speeds. In short, this motorcycle is designed to shift at incredible speeds and safely and securely. With so much power, a modern-day bike needs braking to match, which is why the Lazareth LM 847 has two 8-piston callipers on 420mm discs. Not only that, but within the handlebar of the bike, you can find reversed brake levels to provide extra precision when braking, as well as superior ergonomics.

If you shut your eyes and thought of your ideal futuristic bike, in all likelihood, you would imagine something close to the Lazareth LM 847. This beautiful creation looks as though it has been plucked from the Tron universe and adapted for the roads of modern-day. The body is designed to stick low to the ground and remains as aerodynamic as possible, allowing you to either sit up and enjoy the ride or hug down low and become one with the bullet.

However, if you are interested in getting your hands on a Lazareth LM 847, you will have to move almost as quickly as the bike itself. Ludovic Lazareth’s company only created ten of these masterpieces, and now only five are available for sale. But perhaps the rarity of the bike only adds even further to its allure. If one thing is for sure, you won’t drive past anyone else with the same motorcycle on a Sunday afternoon.

Suppose you are able to become one of the lucky five. In that case, there are likely few more satisfying feelings than letting rip with that V8 Maserati engine on a nice piece of the open road or leaning into a corner with the Lazareth’s tilt design. This has to go down as one of the most impressive engineering feats this year, if not this decade.

Domenica Group makes waves in the Property World of Cyprus

Domenica Group makes waves in the Property World of Cyprus