There are vehicles specifically for the mountains, such as snowploughs, salt spreaders, and other four-wheel-drive vehicles. But if we really wanted to identify one, not so specifically, but with the right characteristics combined with a touch of class, we could not fail to point the finger at the Bugatti EB 110 GT. A fascinating car with a history behind it of those romantic, old-fashioned, passionate and fundamentally local ones, of a strong-willed, ingenious and proud Italy that knows how to make itself respected for its charisma even beyond national borders.

Taking a brief historical excursus, ‘Automobiles Ettore Bugatti’ was founded in 1909 by the Italian Ettore Bugatti in Molsheim, a small town in Alsace in Germany at the time, where he had emigrated to work for the steel company ‘De Dietrich’. During the First World War, Bugatti, converted to war production by the Germans, was razed to the ground by French planes, only to be rebuilt by its owner after the end of the conflict in Bordeaux, France. The company, again confiscated by the Germans during the Second World War, was only returned to its rightful owner in 1947, two months before his death.

After alternating fortunes, the brand was bought in 1987 by Romano Artioli and Paolo Stanzani. They established the company this time in Italy, in Campogalliano, near Modena, where the fantastic Bugatti EB 110 GT was born in 1991. The factories, named ‘Blue Factory’, are designed by Gianpaolo Benedini, an architect who also takes place, in the design of the supercar, of Marcello Gandini and Paolo Stanzani himself, who is too closely linked to the models of Lamborghini, their home company. In particular, they are accused by Artioli and Nicola Materazzi, technical director, of incorrect torque and weight distribution between the front and rear of the car, as well as an overly wedge-shaped profile.

Thus, according to the wishes of the new management, the engine, a 12-cylinder V-cylinder with aluminium and magnesium alloy cylinder block and aluminium and titanium cylinder heads, is placed in a longitudinal, mid-rear position. The engine, with dry sump lubrication and two overhead camshafts per bank with five valves per cylinder, has the unique feature of being equipped with a supercharging system with four turbochargers. With a displacement of 3,500 cm³, it reached 100 km/h in 3.5 seconds and a top speed of 350 km/h. 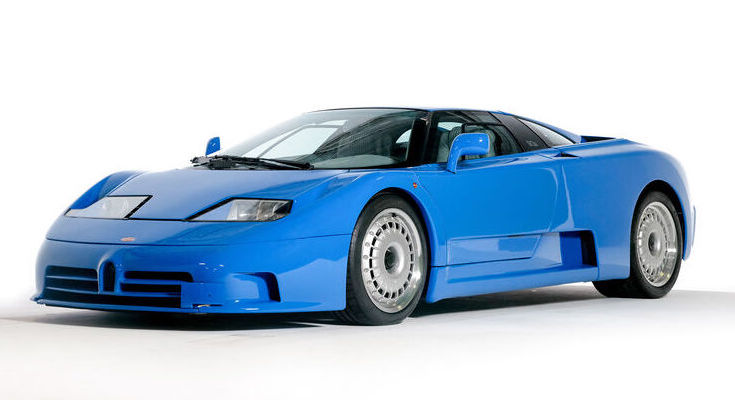 Everything contributes to building a good car for four seasons but with extra gear for the high mountains. The four-wheel drive, an absolute novelty for a supercar, ensures excellent grip even in the most extreme hairpin bends. The monocoque carbon-fibre tub chassis well support the all-wheel drive, an innovation borrowed from the world of aeronautical production. With its gentle curves, the aluminium bodywork supports Artioli’s desire to seize more aerodynamic opportunities and stand out from the wedge-shaped lines of Lamborghini’s rivals. And it was no coincidence that in 1995, on the frozen sea at Oulu in Finland, the car set a world speed record on ice by reaching 296.3 km/h, compared to the previous record of 195 km/h achieved, however, with studded tyres. And speaking of glacial temperatures, the “EB 110 GT” combines mechanical functionality with interior comfort at low temperatures, with an extremely effective heating system designed entirely by the company’s engineers, as are the car’s other 9000 parts. All innovations are realised by a staff characterised by the feeling of a big family, given their attachment at work.

‘Power is nothing without control used to be a famous tyre advertising slogan in the early 1990s. The Bugatti has made this requires its own, even in its narrow wheelbase of 2550 mm, allowing balanced agility at high speeds and on extremely variable routes such as Alpine roads.

The official presentation took place on 14 September 1991 at Place De La Défense in Paris in the presence of two illustrious godfathers, French President Francois Mitterrand and the actor Alain Delon, followed by a triumphal promenade along the Avenue des Champs – Élysées and a spectacular gala in the Palace of Versailles. The date chosen for the presentation falls on the 110th anniversary of Ettore Bugatti’s birth, thus explaining the car’s name. Commercial success was high, but Bugatti’s credit exposure was equally high, to the point that, although there were orders to be met, production came to a resounding halt in 1995, with a total of 139 of the various models sold.

In May 1998, the Volkswagen Group bought the rights to the Bugatti brand from Artioli, effectively ending the Italian experience. In 2019, however, revived the myth of the EB 110 through the new ‘Bugatti Centodieci’, which is a tribute to a never-too-celebrated car and a beautiful, powerful and high-speed car. In a word, a Bugatti.

How to turn your house into a “Green” Home

Lamborghini 3500 GTZ Zagato… a masterpiece between dream and reality

118 WallyPower Yacht… The Majesty of the See